HARC, the Highly-Available Resource Co-allocator, is a system for creating and managing resource reservations. Multiple reservations are made in a single, atomic step. The most common use of HARC is to make advance reservations on multiple supercomputers, for use in a single MPICH-G2 or MPIg metacomputing job. However, HARC is not limited to compute resources (or to making reservations that have the same start time and duration).

This page gives an overview of HARC, and some pointers. For details, and for up-to-date information on HARC, please visit the HARC Wiki at http://wiki.cct.lsu.edu/harc/HARC.

Co-allocation (also called Co-scheduling) is the booking of multiple resources in a single (atomic) step, as if they were a single resource. This bundling is important for those classes of applications that need multiple, distributed resources. The most common application classes that benefit from this facility are:

In both these scenarios, it is desirable to schedule all of the required resources in one step, whether or not the start-times and durations of the individual reservations are the same. (The Meta-computing scenario is really just a special case of the more general Workflow scenario.)

It's worth noting that the term co-allocator and co-scheduler are sometimes used to refer to systems that only deal with the the Meta-computing scenario; HARC is designed to handle both scenarios.

The term co-reservation is also used sometimes, and appears to be synonymous to co-allocation.

How does HARC work? 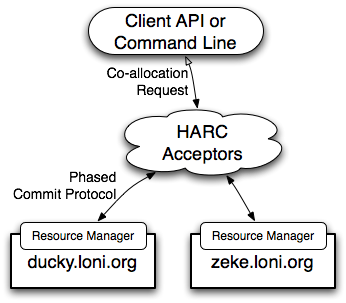 The goal of the HARC Architecture was to provide a co-allocation service without creating a single point of failure. HARC is based upon Lamport and Gray's Paxos Commit protocol, which is where the term Acceptor originates. The Acceptors are a distributed group of services, which act in a coordinated fashion. The overall system working normally provided a majority of the Acceptors stay in a working state. This would allow a deployment of 7 Acceptors to have a Mean-Time-To-Failure of a couple of years.

The Java Client API provides a simple interface through which applications can make resource requests. (Status enquiries, canceling, etc. are also provided.) A simple command-line interface is built on top of the API, giving easy access to HARC's functionality. The following example command would try to reserve 8 cores on each of the LONI AIX machines bluedawg and ducky, starting at 12 noon, for one hour.

What can I reserve with HARC?

HARC is an extensible system, from the Resource Manager layer, right up to the command-line interface. To date, there are three Resource Managers (RMs) which have been implemented (around a common core of code):

This more complex example reserves time on supercomputers at LSU and MCNC, plus a dedicated lightpath connecting the resources across the EnLIGHTened Computing testbed.

The hope is that other groups are able to develop Resource Managers for new types of resource. This can be done without modification to the rest of the codebase. Unfortunately, there is currently very little documentation on how to do this. If you are interested in doing this, please Contact Us – having someone interested in writing an RM will help motivate us to document this part of the system.

HARC is currently deployed on subsets of LONI, TeraGrid, UK NGS and NorthWest Grid. For details, please see the Deployments page on the HARC Wiki.

Please send all questions and queries on HARC to harc@cct.lsu.edu.