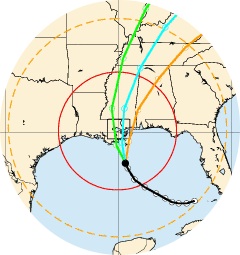 LPFS is a collaboration that joins CCT with the Institute for Marine Sciences at University of North Carolina and the U.S. Army Corps of Engineers using LONI. LPFS is also connected to the SCOOP project and the CCT Katrina Visualization Project.

The general procedure is to create an ensemble of multiple storm surge simulations based on the consensus storm forecast from the National Hurricane Center and perturbations to this forecast. Winds are generated using a synthetic wind model (based on the Holland wind model).

The ensemble produces forecasts of predicted water level and wind speed along the southern shore of Lake Pontchartrain near the mouths of the drainage canals, and these forecasts are dissimintated via web pages within two hours of the initial advisory.

The resources provided by LONI are "on demand" and event driven. The event driving the need for resources is a hurricane or strong tropical disturbance entering the Gulf of Mexico. The threat that the storm is posing on New Orleans determines the alert level (yellow, orange, or red), and this determines the level of priority the system gets on LONI's resources. At the highest threat level, red, LPFS is given dedicated access to the LONI resources.

Background
The Army Corps of Engineers has installed gated structures in New Orleans at the heads of drainage canals at 17th St., London Avenue, and Orleans Avenue. In the event of a hurricane threat, these flood gates can be closed to prevent Lake Pontchartrain water from entering the canals, stressing the flood walls and subjecting the city to another catastrophic flood should the flood walls breach.

Because closing the flood gates limits the use of the canals for draining floodwaters from rainfall or other sources from within the city, it is advantageous to minimize any flood gate closure period.

A 3-D rendering by Werner Benger of the southern shore of Lake Pontchartrain showing the 3 canals of interest.
Other Applications and the Future
LPFS is moving towards a fully distributed framework that will allow for more complex and adaptive data driven systems to be created for both practical applications and research. The DynaCode project is adding the dynamic part to this system, and we are adding resource alert levels, monitoring, notification, and dynamic ensembles.

The Campus Connection
While the primary objective of this project is to provide the Corp of Engineers with real, practical help in determining when to initiate canal gate closures, the LPFS framework is also a system for conducting research on complex, data driven scenerios that are able to detect and react to different data events that may occur during the running of the system. These models can be replicated for other areas of LSU research.