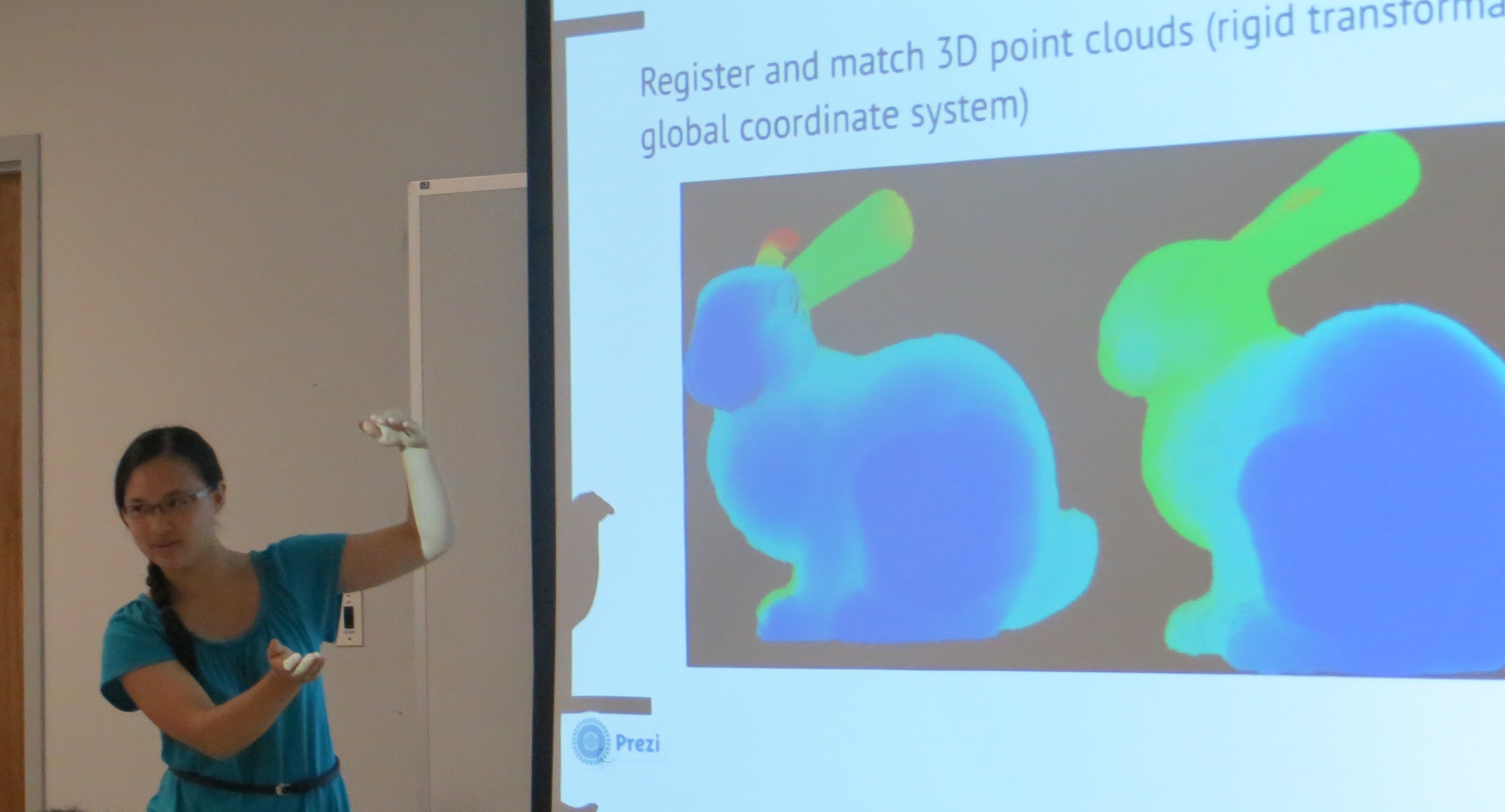 June has been busy for the 16 students who arrived at Louisiana State University Center for Computation & Technology (CCT) at the end of May. They came from a number of different states, some from as far as Massachusetts and California, to participate in the 10-week Research Experience for Undergraduates (REU) program. They have each been assigned a mentor among LSU CCT faculty and are working hard on cutting-edge research in computational sciences.

LSU CCT is an ideal setting for students to become familiar with interdisciplinary research. Its diverse faculty from many different LSU departments explores areas ranging from coastal modeling, black holes and materials science to innovative approaches to supercomputing and computational music. Every Tuesday, two mentors give a 30-minute overview of what they are tackling with their students, while on Fridays, the young scientists report on what has been accomplished.

“I dream of a world where personal aircraft reign as cars do now, and I want to be a part of that revolution,” said Yan Li , junior at Cornell University majoring in mechanical and aerospace engineering. “During the 10 weeks here, I hope to integrate the 3D modeling research I'm doing now with a quadcopter project I began at Cornell, so CCT is definitely helping me along there. This experience will help me specify my research interests a little more,” Li said.

The REU program, funded by the National Science Foundation (NSF), supports undergraduate students across the United States. Students do not apply to NSF to participate in REU activities but apply directly to REU sites or to NSF-funded investigators. Each student receives a stipend of $5,000, free housing in university dormitories, and up to $600 in travel expenses.

“I think it is essential to provide opportunities to young students to learn about what we do on a daily basis at a major university like LSU,” said REU’s principal investigator Juana Moreno, who is faculty at LSU CCT and an associate professor in the Department of Physics & Astronomy. “I strongly believe faculty need to benefit the community at large. Most people have not been able to access the kind of educational opportunities we have had. For example, my parents could not even complete elementary school. At our program we try to recruit first-generation college students, community college students and minorities to introduce them to research,” Moreno said.

The students learn how to use the most current cyberinfrastructure tools with individually designed training sessions targeted to their specific degree of preparation. In addition, since most CCT faculty collaborate with international researchers, REU students are exposed to how international collaborations work.

“I recently became interested in biophysics from a research point of view, because it has the potential for many medical and biology applications,” said Anya Leach, a senior physics major at West Virginia University . “I hope that my experience at CCT will confirm my chosen career track of staying in academia. During the 10 weeks in Baton Rouge, I hope to become well versed in molecular dynamic stimulation and proficient in as much programming as I can,” Leach said.

“I was drawn to computer science by the power and flexibility of computers to accomplish virtually any task, and because computer science can be used to aid other fields of study,” said John Tyler, junior at the University of Massachusetts. “I was pretty sure I wanted to participate in an REU program this summer, and this particular program interested me because it seemed like it was more developed than a lot of other programs.”

“This is my third year as an REU mentor, and essentially what I like is the excitement of the students,” said Peter Diener, faculty at LSU CCT and an assistant research professor in the Department of Physics & Astronomy. “My current student has just graduated from high school, and he is actually from Baton Rouge. I am trying to give him a flavor for solving wave equations on computers and want to build up his skill set to the point where he would be able to write a code to evolve the scalar wave equation on the space time background of a rotating black hole,” Diener said.

While their main objective here is to work hard, the participants also take time to explore the unique culture of South Louisiana. On June 8, for example, they went to New Orleans where they toured the French Quarter and enjoyed tasty food.

“What I knew about this city came from two sources: first, Anne Rice, then the news about Hurricane Katrina,” said Elizabeth Hilliard, a junior at Rensselaer Polytechnic Institute in Troy, NY. “Because of my once-fervent love for Anne Rice novels, just seeing simple things like street signs labeled “Rue” was magical. The city has been through so much and yet it stands, a diverse and vibrant place full of life. I even sort of loved the sticky heat.”

Research Experience for Undergraduates is a great opportunity to gain experience in research, and it can also contribute to the student’s future success in life. For example, Kameron Kilchrist, who participated in LA-SiGMA REU in summer 2011, became one of the five LSU students to receive a NSF Graduate Research Fellowship this year. In the REU program, he worked with Les Butler from LSU’s Chemistry Department on particle analysis in tomography data sets.

This summer’s initial formal presentation took place on June 12, where the students shared what they were hoping to achieve in the program. The final poster presentation is scheduled for Aug 2. We will keep our readers informed on the results of this program.