An interdisciplinary team of LSU researchers is coordinating the largest-ever collaborative study of the seabed where the Mississippi River meets the Gulf of Mexico with $3.8 million in support from the Bureau of Ocean Energy Management, or BOEM. Underwater mudslides have been known to displace historic shipwrecks and pipelines by hundreds or thousands of feet and are likely more common than previously thought. 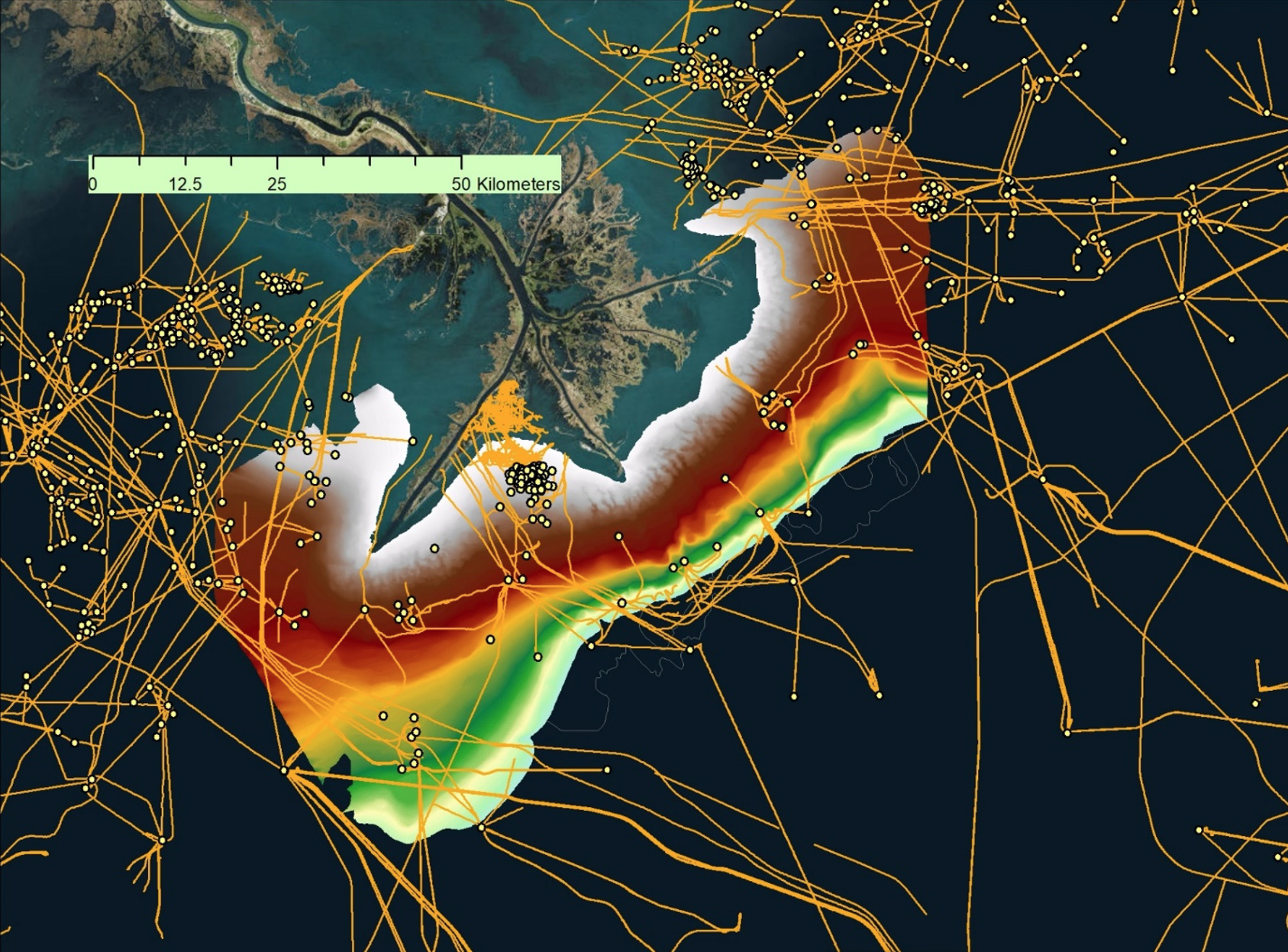 A team of LSU coastal researchers in partnership with multiple federal partners is embarking on a comprehensive effort to understand underwater mudslides around the Louisiana “bird’s foot,” or lower Mississippi River Delta, where the river meets the Gulf of Mexico, beyond the protected levee system. The area, called the “bird’s foot” because of how it looks on a map, is home to significant energy infrastructure, such as platforms and pipelines for oil and gas, as well as several old shipwrecks listed in the National Register of Historic Places. One of those wrecks is the SS Virginia, a U.S. oil tanker that had the monumental misfortune of being sunk by a German U-boat in 1942 during World War II in its first year in the water. Not only is the wreck a historical monument and war grave for 27 souls, it is providing archaeological and scientific information of immeasurable value. The economic value of the existing energy infrastructure around the “bird’s foot,” meanwhile, is well into the billions. All are at risk for movement and damage because of underwater mudslides.

Building on a decade of collaborative and related work with BOEM, the interdisciplinary LSU team has received $3.8 million from BOEM to coordinate the largest-ever state and federal effort to map the Mississippi River Delta Front around the main three digits of the “bird’s foot,” which are Southwest Pass, South Pass and Pass a Loutre. LSU joins multiple state and federal partners on the project, including BOEM, the Water Institute, SEARCH, the U.S. Geological Survey, or USGS, the Naval Research Laboratory, or NRL, the National Oceanic and Atmospheric Administration, the National Energy Technology Laboratory, or NETL, and the Bureau of Safety and Environmental Enforcement.

“Submarine landslides are a huge hazard to seabed infrastructure off the Mississippi River Delta,” Bentley said. “Our primary goal is to do a 21st century assessment of this hazard, and given the complexities and value of the problem, our state and federal partnerships provide the ideal team to do the job.”

“The last major study like this was in the 1970s and also led by LSU,” Bentley continued. “Much has changed since then, from the seabed conditions to the tools used to map the seabed and the needs for offshore energy infrastructure. The knowledge gaps and possible liabilities are huge.”

Smaller studies and partial surveys have already revealed significant movement of the seabed, from shallow depths near shore to the outer edges of the continental shelf. In the two-three years after Hurricane Ivan and Hurricane Katrina blasted through the area as Category 4 and Category 5 hurricanes—in 2004 and 2005, respectively—the SS Virginia moved more than 400 yards. In addition, during Hurricane Ivan, mudslides damaged more than 17 pipelines and up to 20 oil and gas platforms, fully toppling a Taylor Energy platform southeast of South Pass, which tore the tops off of 16 oil wells and caused the longest and second-largest oil spill in the nation’s history—and closer to shore than the 2010 Macondo, or Deepwater Horizon, oil spill. Beyond hurricanes, mudslides can also result from river floods and passing cold fronts; anytime wind, water or seismic forces overcome the shear strength of sediment and soil.

“This is a once-in-a-generation-type project, not done since the 1970s and 1980s,” said Jafari, who is an associate professor in the LSU Department of Civil & Environmental Engineering and the LSU Coastal Studies Institute. “We’re particularly interested in the preconditioning and triggering mechanisms of submarine landslides.”

“It’s a challenging problem,” added Xu, who is the LSU Coastal Studies Institute director and professor in the LSU Department of Oceanography & Coastal Science. “In the past, many corings and surveys were done either before or after landslides, but not during landslides, which often happen when there are hurricanes and river floods. While regular sensors deployed before such events can be displaced, buried or damaged, we will be working with the NRL to test and deploy some rugged and new sensors that can ‘travel with’ landslides.”

Xue, associate professor in the LSU Department of Oceanography & Coastal Sciences with a joint appointment in the LSU Center for Computation & Technology, will collaborate with the NRL and NETL to combine numerical modeling, artificial intelligence and machine learning techniques to fill in gaps and help extrapolate from the collected data.

“The Mississippi River Delta Front is vast, and it’s impossible to perform onsite sampling that covers the entire area,” Xue said. “Numerical modeling and machine learning prediction of seafloor instability will largely expand the spatial and temporal coverage of this study.”

The LSU team will also look at flora and fauna.

“Seabed organisms tell us a story of the history of that location—the frequency of disruptions, the structural integrity and the ability of the ecosystem to deal with change,” said Glaspie, who is an assistant professor in the LSU Department of Oceanography & Coastal Sciences. “BOEM is interested in seabed animals because they connect the physical state of the seafloor to the human uses of the ocean environment.”

The overarching goal of the LSU-led effort, called Offshore Analysis of Seafloor Instability and Sediments, or OASIS, is to gain a better understanding of when, where and how underwater mudslides occur to inform future decision-making related to offshore energy development and infrastructure—both for conventional and renewable energy, as well as for marine mineral extraction, navigation and communication, which all depend on leases and permits. 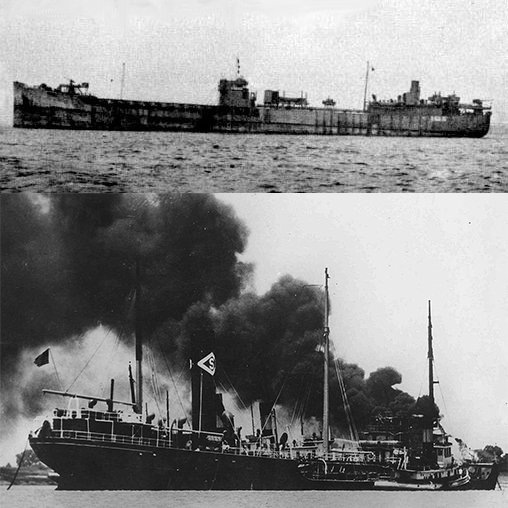 Several shipwrecks are lodged in the muddy seabed around the mouth of the Mississippi River. The SS Virginia (top) is on the National Register of Historic Places. The U.S. oil tanker had the monumental misfortune of being sunk by a German U-boat in May 1942 during World War II in its first year in the water. Only about a month later, in June 1942, another oil tanker, the SS Rawleigh Warner (bottom), was also torpedoed and sank within 10 minutes with no survivors.

“Shipwrecks, such as the SS Virginia, and what they can tell us about the frequency and trajectory of these mudflow events, provide crucial information for BOEM decision-making as it relates to oil and gas development on the Mississippi River Delta Front,” said Melanie Damour, marine archaeologist with BOEM.

“The approaches to the Mississippi River and the port of New Orleans have been a highway of shipping traffic for over 300 years,” added Doug Jones, marine archaeologist and BOEM project officer. “Ships have been sinking in the area for just as long, but what’s there today may not be there tomorrow. One of the many goals of the OASIS project is to identify shipwrecks in mudflow-prone areas in order to predict how and when future mudflow events may affect both the archaeological character of the wrecks and any infrastructure situated in their path.”

OASIS will produce a map of the entire Mississippi River Delta Front for the first time in more than 40 years, with the USGS already carrying out the remaining baseline mapping and geophysical surveys needed to facilitate the effort. The team will use multibeam sensing technology and sediment coring, among other techniques.

“The most important product of our OASIS partnership will be a multi-layered electronic ‘map’ that brings together seabed mapping, hurricane meteorology and the power of supercomputers and artificial intelligence to address the complex hazards caused by underwater mudslides.”