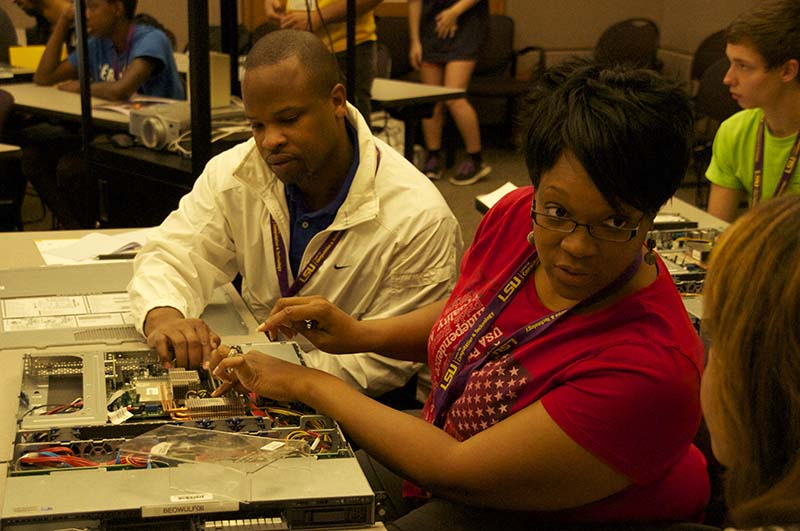 The LSU Center for Computation & Technology (CCT) hosted the sixth annual Beowulf Boot Camp July 8-12, 2013 to raise awareness of supercomputers among high school students and teachers and to show them how these sophisticated machines can be used in research and industry. Thirty-three students from across Louisiana and three teachers from Baton Rouge took part in the event.

Working in small groups, the participants were given a chance to build a Beowulf class supercomputer with their own hands. It is a machine made by connecting several regular computers together into clusters. In addition, participants developed basic applications on the clusters and learned how to carry out simple programming exercises using Python language. The five-day long educational journey culminated with a tour of LSU’s supercomputer SuperMike-II.

“I came to the camp expecting to sit in lectures all day, but it was nothing like that! We did many hands-on activities, which I loved,” said Timothy Holdiness, a high school senior from Monroe, LA, who plans to major in computer science either at LSU or Louisiana Tech.

“I learned how to program in Python and will use this knowledge to make little programs for fun until I go to college and use it for class,” he said.

The camp is named after the Beowulf supercomputing cluster invented by Thomas Sterling, former CCT faculty and LSU Department of Computer Science professor who had worked at NASA before joining LSU. Beowulf is now the building block of many of the world’s supercomputers, including LSU”s own SuperMike-II. Sterling, who led the CCT Systems Science and Engineering research focus area at the time, organized the camp in collaboration with CCT faculty and staff in 2007.

Just like in previous years, the camp was free to qualified participants and filled up quickly. CCT provided workspace, parking accommodations, meals, and also assisted with dorm rooms at no cost.

Hannah Chen, a senior from Baton Rouge who plans to go into industrial engineering at LSU, wanted to do something productive this summer to prepare herself for college.

“My favorite activity was heating up pizza,” she said.

“When the microwave warms up pizza, the outside heats up first and then, eventually, the inside does, too. Working in groups of four, we acted as computers, and used math to figure out what temperature each part of the pizza was. It’s just an illustration of parallel technique called halo exchange, or ghost zone exchange. It is a pretty complicated concept, but once you act it out, it starts making sense,” she added.

Adults and children alike enjoyed the Beowulf experience. Alkinee Jackson, a Baton Rouge teacher who homeschools her children and several others, enrolled in the camp as part of her continuing efforts to educate herself about cutting-edge technology.

“The Linux programming has been the most difficult thing for me this week,” Jackson said. “I only knew Basic, which came out when I was in elementary school, so this is all very new to me. I feel myself stretching, and it’s exciting,” she added.

“I specifically enjoyed playing the dragon game,” said Liam Sheehan-Dean, a sophomore at the LSU Laboratory School who recently moved from West Virginia. “We were able to customize the dragon, choose how it moves, how it shoots, and how it looks using the Python language we learned here.”

In the Dragon game, developed by a former participant of the Beowulf camp, players have their own dragon character that they customize using Python and message passing interface. Then all of the characters are projected up on the screen to make it easy to see who wins. The game’s objective is to show that parallel programming and supercomputers are fun.

“I would recommend students going into computer science to think of supercomputers, or high-performance computers (HPC), as a career direction,” said Beowulf camp’s main instructor Steven Brandt. He is a computational scientist at CCT whose background is in using supercomputers to simulate colliding black holes.

“Specialists in supercomputers are in high demand as these machines have become involved with almost every area of human life. Even Pringles potato chips were designed using a supercomputer. Diapers currently use a lot of modern technology to simulate how they should work and how the different layers should be put together. Supercomputers are everywhere!” he added.

Speaking at the closing ceremony to the camp’s participants and their parents, CCT’s Director Joel Tohline shared his educational background and the technological evolution that took place in his lifetime. An internationally recognized astrophysicist and in all respects a computational scientist, he used a sliding rule to do all calculations in college and purchased his first digital calculator with the money his parents gave him as his graduation gift.

“You are starting out with significantly more advanced technology than what we had,” Tohline said.

“Project your career forward: what will you be using 40 years from now? You might have the capability of SuperMike-II in your smart phones, or even imbedded in your brain! I encourage you today to take on this adventure, and think about what you will use technology for,” he said.