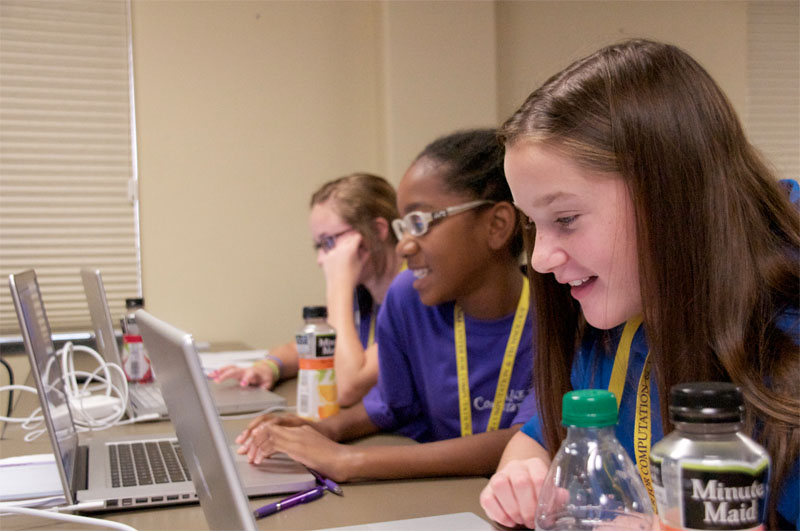 Caption: Computer games are fun to make, not only to play!

Technology continues to dominate much of our daily lives, but where is the female equivalent of Bill Gates or Steve Jobs? There have been many efforts to draw more women into technical fields, but they are still far less likely than men to major in such fields as engineering and computer science.

Louisiana State University Center for Computation & Technology is making its contribution to encouraging girls to explore careers in the STEM disciplines. On June 10-14, 2013, for example, it held the Alice in Computation Land camp for the third summer in a row, teaching Baton Rouge middle school girls how to create webpages, animation, video games and movies on the computer.

“The girls seem to be very enthusiastic and open to new ideas,” said Kathy Traxler, camp instructor and CCT’s education and outreach specialist. “We used the Alice 3-D project to tell stories and also built games using a project from MIT called Scratch, as well as another project called GameSalad. At the end of the camp, I told the girls they’d been programming all week long, and they were immediately awed that they had written not just one but multiple codes,” Traxler said.

“The girls tend to be most interested in making their own video games, because that’s what they see their peers using. At this point in their lives, most of them never met failure. So they just go in expecting to be able to do things, and typically before I finish my tutorial they will already be halfway through making a new game,” added Traxler.

“My favorite thing was making my own video game," said 8th grader Emma Stoecle. “The idea was to shoot apples from the watermelon with the watermelon seeds.”

Another 8th grader Deepti Vaidyanathan, who plans to go into robotics engineering or genetic engineering like her mom, said that making games was more difficult than she’d expected. “Scratch was kind of easy because I did something similar before, but the GameSalad was harder because we had to learn the attributes, how to change things, and what the controls meant, so it was very complex.”

Deepti’s dad, a computer engineering professor at LSU, has been instrumental in shaping her interests and encouraged her to attend this camp. “At other camps I kind of knew most of the information because my dad taught me a lot, but at this one I barely knew anything,” Deepti said.

Before coming to the Alice camp, 7th grader Anne Marie Gahagan did not know that it was possible to make movies on the computer. “My movie was about fish that could talk. The fish were doing tricks in the water and talking to each other. When a person overheard their conversation, he fainted because he was surprised that the fish talked.”

Computational skills that are acquired at a young age will serve the girls well as they prepare for the challenges of high school, college and real-world careers. 8th grader Kawathy Balamurugan, whose parents are both chemistry professors at LSU, said that in the past when she was given a choice to do either a poster or a website for a class project, she would always pick the poster. “This camp taught me to be more technical, and now I will definitely choose to do a website.”

Maurie Morris, a 7th grader, also agreed that the experience she gained at the camp will help her in her studies. She wants to go into sports medicine and participated in this camp because her mom made her, but, by the middle of the week, she realized that it might help her in college. “These skills will definitely help me go through medical school, because I’ll have to take a lot of classes that involve technology. Technology is always changing in our world, so we always need to be informed and know the latest trends.”

Seventh grader Ava Reinecke said this camp boosted her self-esteem. “When I grow up, I want to become a chemist, so I will most likely use a lot of technology. In this camp for the first time in my life, I realized that I am not scared of computers and technology, that I actually can do it!”

One of the youngest participants of the camp, Navya Murugesan, who will go into 6th grade this fall, decided to enroll in this camp because both of her parents are engineers and teach her about computers at home, but she wanted to learn more by coming here. “I will definitely come back next year, because it will keep me from forgetting what I learned this week, and every time there is something new to learn.”

Studies have shown that providing an opportunity for young women to master technical skills in a creative and fun environment makes it more likely that they will pursue careers in fields such as science and engineering. This is particularly important because women are traditionally underrepresented in these areas of the workforce.

A student-worker at the LSU Center for Computation & Technology who helped with the Alice camp this year, Laren Becnel, a junior in mechanical engineering at LSU, wishes there were more girls in engineering. She remembers that in the very first class she took in her freshman year, when she walked into the room there were only three other girls in the auditorium of about 70 people. “I chose mechanical engineering because we study how things work and there is so much you can do with it, so many things you can build!”

Another reason why Lauren chose engineering is because she can’t imagine not taking math. “It is a completely different world. In other disciplines you study words, but in math you do problems. Always, since I was little, math was my favorite subject. Math never ends.”

Elizabeth Hilliard, a junior in physics at Rensselaer Polytechnic Institute in Troy, N.Y., who came to LSU Center for Computation & Technology to participate in the Research Experience for Undergraduates program this summer gave a presentation to the Alice camp participants introducing them to her research project. “The most important advice that I can offer the girls for succeeding in STEM disciplines is to ask questions. There is no such thing as a silly question and there is always more to learn, so even if you think that you understand everything, ask questions to learn more,” Hillard said.

“I hope that more girls will go into technical fields, but for now it gives me a sense of pride to know that I am pursuing my interests despite what society may think is the norm,” added Hillard.

An interest in science and technology needs to be cultivated at a young age, and this is exactly what LSU Center for Computation & Technology is doing. It is committed to showing girls they can succeed in technical fields and can contribute to the technology they use in their everyday lives.