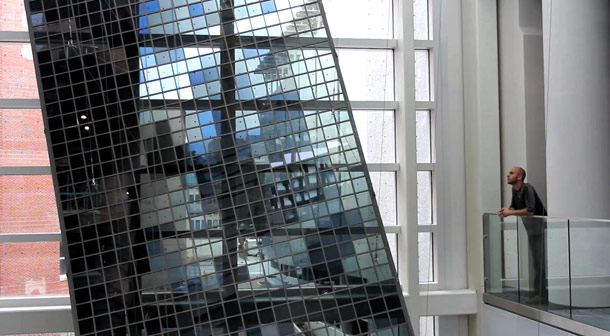 We rely on machines—digital, analog, and squishy human machines—to edit, deliver, and interpret streams of information for us every day. In this workshop, we will investigate and design means of disrupting the processes of human/machine information consumption.

Participants will choose from a prepared set of streaming transcripts—television shows, movies, and political speeches—and design a dynamic typographic visualization that deconstructs the text stream in real time. Each participant will choose an aspect of the transcript to explore and explode. We will use language processing libraries to search and parse the text, and develop web-based visualizations.

Requirements: The workshop will be 3 hours long. Attendees will need a laptop and should have some familiarity with HTML, CSS, and Javascript. Designers and programmers welcome. We will provide the backend and frontend software infrastructure for streaming, parsing, and displaying the text stream in a web browser.

Justin Manor Bio:
Justin resides in San Diego, CA, and manages the west coast branch of Sosolimited. He founded Sosolimited in 2003 with John Rothenberg and Eric Gunther, who he befriended while at MIT. He received his MAS from the MIT Media Lab under John Maeda, where he studied computer video, sensor technologies, computational psychology, and realtime special effects. His main passion is to create installations and software artworks that detect and celebrate moments of absurdity in consumer mass media. Justin envisions a utopian future where we will build the machines that not only create our content, but watch it for us as well.

Abstract:
Justin Manor is a co-founder of Sosolimited, an art & technology studio based in Boston and San Diego that creates work which incorporates elements of information, architecture, lighting, and contemporary digital culture. Justin will present projects that his firm has worked on that have used new technologies in novel ways, and highlight how their inclusion has influenced the design process and overall aesthetic outcome. Sosolimited has been commissioned for installations and performances at the 2012 London Olympics, the US Presidential Debates during the past three elections, and the Center for Strategic and International Studies. They have also created interactive projects for HBO, IBM, Google, Honda, and VICE.

BOTH EVENTS ARE FREE AND OPEN TO THE PUBLIC!